It may not sound like it, but those words are meant as an endearment. Honestly! There are seven girls on my list as of this writing. Each is a little crazy in her own way, and each has earned a place on the list by no small amount of effort!  Most have stayed with me multiple times over many years, so they’ve had plenty of time to work their magic. Jane is the only newcomer to Halfling. 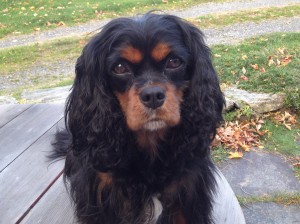 Some of you may have heard me speak of the first Terrible, Horrible, Awful girl: Atti.  She was born and raised here at Halfling, and the endearment originated with her. As soon as she was old enough, and coordinated enough, her preferred activity was jumping, mostly in an upright position on her hind legs. She has very strong hind legs!  Now at 4-years-old, she is still jumping – on me, on other people she meets, while waiting for meals (her head can top my kitchen counter), and just in sheer exuberance. I have no excuse for this continued poor behavior. To be fair, she only weighs 18 pounds. (Oops – that sounds like an excuse!)  She will drape herself over my shoulder if there isn’t room on my lap, or simply lie on top of the other dogs until they feel squished and move over because she’s heavier than they are. She was the only female in her litter, and it was apparent very early on that her brothers were much more laid back than she was.  I had to separate her from the boys during meal times because she would have eaten everyone’s share in the blink of an eye. She would get away with that even now if any of her house mates allowed it.  Fortunately, they don’t.  She doesn’t bother with anything that might slow her down, such as chewing her food, or walking nicely. She does everything quickly and forcefully.  She would prefer to spend all day and all night with a tennis ball in her mouth (except when Bama is here – see below), tossing it continually at my feet in hope that I’ll throw it yet again.  As a pup, she commandeered every toy and bossed her siblings around. Frankly, I didn’t really like her very much, and often felt badly for her brothers. Well, that was then and this is now.  She has worked hard to earn my love and admiration, which she has achieved completely. Atti is short for Attitude.  I read the other day that “Attitude is the difference between an ordeal and an adventure.”  Atti is both, and I love her just the way she is. 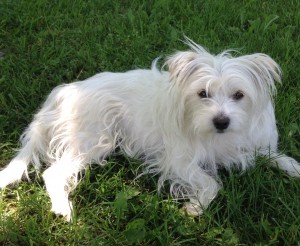 Bama is a Chihuahua/terrier mix, an adorable 10 pound hellion. It’s important not to be fooled by her cute exterior. I mean no offense to Chihuahuas everywhere, but you’ve probably seen it before: the tiny dog who assumes she has the power and presence, if not the size, of a Great Dane.  Bama will easily and happily keep large dogs in their place and loves playing with the ones who will play back.  She can be very bossy, and if she were bigger, she could be a force to reckon with.  She is tough and won’t hesitate to brawl if she feels like it. Atti learned the hard way to give her a wide berth when she’s feeling her oats.  She will fiercely guard any toy in the house, which means there are never any toys lying around during her visits! She does love to play though, and she will try to cajole even the most reluctant dogs into a game of chase.  Did I mention she also loves to bark? Ah yes – that high pitched Chihuahua bark! She barks at every dog, car, bird, or squirrel she sees (or hears), and barks each and every time a door opens or closes. There are lots of comings and goings around here during a normal day, so she can get pretty noisy. I have blocked her view out the windows because it helps tremendously with the noise level, at least with the watching-squirrels-and-birds recreational barking. We almost get used to the noise, but on the occasions that she is at her own home, the silence is notably deafening. 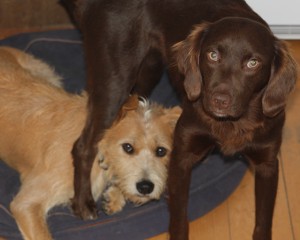 Bebe and Walli are naughty girls. When you take care of lots of different dogs, naughty is not usually a description that warms your heart.  Their owner affectionately refers to them as Crack and Cocaine. Yes, indeed!  Bebe and Walli both have a wonderful sense of humor and are so good natured that even their not-very-well-behaved antics can slide by me. They enjoy bending the rules: not to be bad, but just to have fun. Then they grin wider and wag harder until you just have to laugh. “Oh? I’m not supposed to jump over the kitchen gate?  Sorry, I’ll just jump right back.”  “You wanted the dirt to be in that flower barrel? Why?  I worked very hard to dig it all out for you.” Bebe should be in the movies: she looks like the quintessential mutt, medium sized, tan and terrier-like. Walli is a brown spaniel-like mix with striking green/yellow eyes.  She and Bebe are totally in love with each other.  Walli likes to be as close to Bebe as she can, even to the point of sitting or lying on top of her – not because there isn’t enough room, but because she prefers it.  These girls play like there’s no tomorrow, with incredible speed and agility. When they’re really on a roll, I put them in the back yard where there are fewer obstacles to get in their way – or for them to accidentally crash into – as they are oblivious to anything but each other. Bama likes to be their referee, and that makes for a very noisy sport.  She barks and throws flags down at every turn, trying to get their attention.  Bebe and Walli don’t even notice. 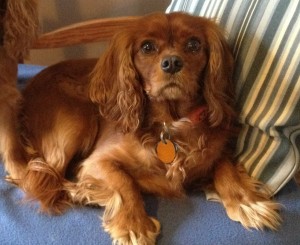 Bisou is a ruby Cavalier, and an older half-sister to Atti.  She may be the most intense Cavalier I’ve ever known.  She has very penetrating eye contact.  She surely reads thoughts, probably translates those thoughts into several different languages, and maybe even writes some code while she’s at it.  She will predict your next move, whether you think you had one or not. She has a strong will combined with an abundance of enthusiasm and joie de vivre. Whatever is going on, Bisou will be the first in line and moaning loudly in anticipation. Remarkably, she is an even more tireless retriever of tennis balls than Atti. I’ve never had the strength to throw the ball long enough to wear her out.  Like Atti, Bisou does most things quickly and forcefully.  Bisou, however, has better manners (and more consistent training!) and does not jump all over people, especially not the people in the nursing home where she regularly goes to visit. Her owner says Bisou is transformed into a quiet, respectful, and gentle presence when she is with people who are frail. When she goes home after those visits, she sleeps for hours as if she’d been running agility obstacles, not sitting sweetly on people’s laps.  She must expend a lot of energy to contain her energy. 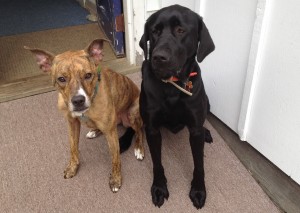 Pearl and Jane have only recently been added to the Terrible, Horrible, Awful girl list. Pearl is a beautiful black lab who is quite large and powerful and much prefers to be the dog in charge. When she meets another dog, she insists that they acknowledge and accept her preferred status, the quicker the better.  Most dogs readily defer.  Once her position is established to her satisfaction, she’s a sweetheart.  Pearl’s expectations were turned a bit upside down when she met Jane for the first time.  Jane is most likely a Basenji mixed with who-knows-what.  She weighs less than half what Pearl weighs, but makes up for her smaller size in outrunning, outmaneuvering, and even out-manipulating Pearl. Like Bebe and Walli, Jane is incredibly agile and fast.  She has a sort of herding behavior when they are running and chasing, leaping on and over Pearl’s back. Jane has neither an “off” button nor a “mute” button.  Those Basenji genes contribute to some creative vocalizing when she’s excited, more like screaming than barking. It sounds like some poor creature is being tortured and it can be distressing. Pearl looks fascinated, and maybe a little intimidated, when Jane is giving voice. In spite of their size difference, they are quite well matched in their style of playing.  They’ve been here together now for about a week.  They started out with incredibly high energy, but they have now slowed way down. After days of constant play, they are hanging out and napping for long periods of time. This morning Pearl and Jane were having quiet time on the porch while I cleaned up the yard.  I was outside for about 10 minutes and came back to a sea of white fluff from the pillow they had just “killed”.  I’m pretty sure this activity was instigated by Pearl (she has been known for similar activities in the past).  Jane was smiling innocently; Pearl had the good grace to look ever so slightly guilty.  They had been quiet though.  I never heard a peep from them.

These dogs are all sweet and affectionate. Their personalities demand more attention and supervision than some other dogs who stay with me. I appreciate what each of them teaches me (especially about patience!) and am grateful for their presence in my life.  Now I need to take a nap, because four of the above mentioned Terrible, Horrible, Awful girls are here together, and I’m a little tired. 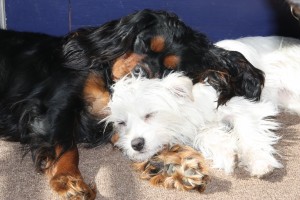 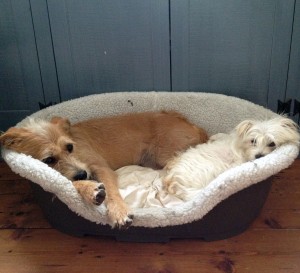 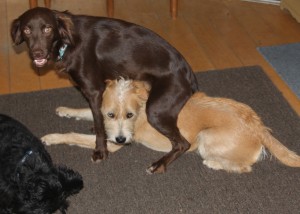 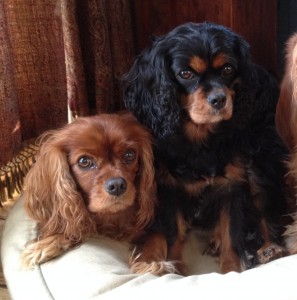 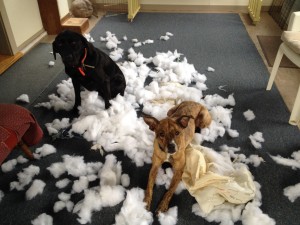 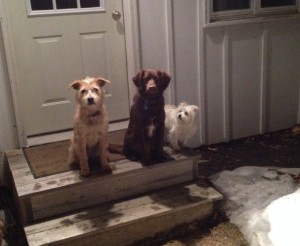