No – not the season we are all sick of and gratefully waving goodbye to.  I’m talking about a dog named Winter.  She’s a Cavalier King Charles Spaniel of a certain age.  Winter’s owner died last spring, and in spite of her age and a long list of questionable health issues, the family decided they would prefer for Winter’s remaining days to take their natural course.  So Winter came to live with me last year on Memorial Day at the age of 13 and a half.  A long conversation with her previous vet indicated that she might not be with me for very long. 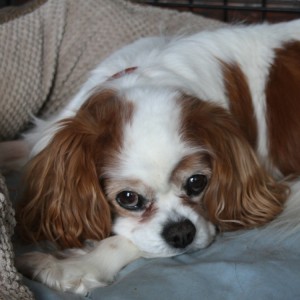 Her “real” name is Whitney, but I have a daughter named Whitney so I didn’t want to call her that.  She’s also deaf as a post, so I knew she wouldn’t mind (or necessarily notice) if she suddenly had a new name for her old age.  I compromised by choosing a name that at least “looked” similar to a lip reader. Believe me, deaf dogs do read lips, and hand signals, and facial expressions. I’ve had deaf dogs.  When they didn’t want to hurt my feelings by openly ignoring my requests, they would simply look the other way so they wouldn’t have to see me gesticulating wildly for them to come inside.

Winter was very withdrawn at first.  She seemed depressed and confused.  Imagine how traumatic it was for her to lose the person she loved most in the world and then to find herself in an unfamiliar environment filled with lots of other dogs.  She slept most of the time for the first couple of months which didn’t surprise me, especially considering that aforementioned conversation with her vet.  Then she slowly started to emerge from her hibernation and eventually began weaving herself into our household.  I was originally concerned with how she would deal with all the other dogs, but she greeted each of them happily and calmly, as if she had met Newfoundlands, German shepherds, and/or Chihuahuas every day of her life.  She moved from her own bed in a quiet corner to one of the communal dog beds in the middle of everything.  When no one seemed to mind that, she claimed it for her own and hung out in that spot for a few more months.  By last fall she had moved to a spot in the dining room which in this house is (mostly) small dog territory.  It was her room with a view, as she could keep her eye on things between naps. 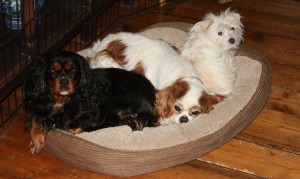 Well, that was then, and this is now.  So what, you may wonder, happened with that long list of health problems  – the tumor on her spine, the pancreatitis, the unexplained kidney and neurological issues, etc?  I really don’t know.  Winter’s previous owner’s daughter (got that?) says that Winter thinks she’s already died and gone to heaven, so there’s no need to fuss.  Her arthritis is clearly in evidence, so I’m very careful and gentle if I pick her up for any reason.  She still has a heart murmur, but it’s a grade less than the murmurs of two of the other (younger) Cavaliers who live here.  Sometimes she walks like she’s had a few beers, or even occasionally a few martinis.  Her front end doesn’t always communicate well with her hind end, and she lists and drifts sideways almost as much as she moves forward.  But she gets where she’s going, and she can even run when she wants to – especially if it’s meal time. And speaking of meal times – they have become very noisy since Winter joined our family.  Her very loud opinion is that I don’t get the food bowls down quickly enough.  Thus meal preparation is accompanied by incessant barking and lots of twirling.  This behavior went uncorrected for way too long.  Why not just let her do her excited dance, I thought?  Life is short – right?  Now it’s horribly obnoxious.  One of the younger dogs (who shall be unnamed other than by my endearment for her which is “The Terrible Horrible Awful Girl” – some of you know of whom I speak) is trying similar annoying behaviors.  She thinks Winter is setting an interesting precedent.  I stare at them both sternly, and you-know-who knows exactly what I mean and sits quietly.  I point my finger silently at Winter, and she refuses to know what I mean.  She stops barking for maybe three seconds.

Winter is now asking (demanding) to get up on the couch with all of us in the evening, which I love.  She never did that until a couple months ago.  She’s a bona fide tribal member now.

Maybe we both protected our hearts at first, not wanting to get too attached to each other.  After all, Winter came here essentially for “hospice” purposes.  But as time goes on we have opened up to each other. Winter had her 14th birthday in January, and now the spring has come around again.  Soon (I hope) we will celebrate her one year anniversary as a Halfling.  We just take it one day at a time – and each day I am grateful for the unexpected gift.