The untimely death of a beloved dog can be devastating. We lie there in the wee hours thinking about all the “what ifs.”  We wonder if we could have made other choices, and if that might have changed anything.  Sometimes things happen too quickly, and there is no time for choice. We just wish we could turn back the time, even if it probably wouldn’t help. 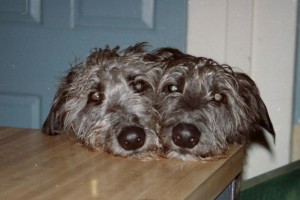 In addition to our own grief, witnessing how distressing the loss can be to other dogs in the family makes an already painful situation almost unbearable. It took me years to recover from the sudden death of my 2-year-old Scottish deerhound, Enya, who died 24 hours after she was spayed.  Her brother Lian whined constantly after she was gone.  He wandered around the house looking for her, or stood staring out the windows, making my own grief even harder to deal with.  Enya’s death was particularly stressful for me, and I was very distracted searching for some explanation – or someone/something to blame. I’m sure that added to Lian’s sense of loss.  I was as confused and shocked as he was.  Her death shook my confidence in…..what?  I took a seemingly healthy dog to have a routine surgery.  I began questioning what I “knew” and what I saw when I looked at my other (healthy?) dogs. 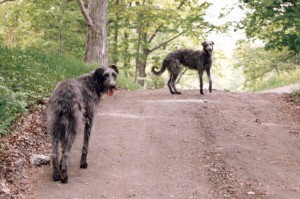 Many years later, when Lian died, I called his breeder to let her know of his passing.  She told me there had been numerous Deerhound deaths similar to Enya’s, including one of her littermates. There was research going on at the University of Pennsylvania, and it was eventually determined that some Deerhounds have a Factor VII deficiency, which is a coagulation disorder.  Although I couldn’t “see” it happening, Enya most likely bled to death internally because her blood didn’t clot properly. Factor VII deficiency can be tested for now with a blood test, but back when Enya died (1994), no one knew it was lurking in the genes of Deerhounds. 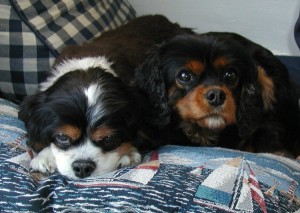 When my first Cavalier, Belle, died at the ripe old age of 14, my other Cavalier, Willow, rejected all efforts by us to comfort her in her grief, and she withdrew into her own world.  She remained depressed for about two years.  She had little interest in engaging in what went on around her. When the puppy Gio, who had come to live with us a few months before Belle died, jumped up in the chair to be with her, Willow would jump down and get in a different chair. She refused to accept any of Gio’s attempts to be her friend.  I became so concerned about her withdrawal that at one point I even considered trying anti-depressants.  Only Zen was able to penetrate her emotional barrier during that time – Zen was Willow’s cat.  They grew up together, so Zen was already part of Willow’s inner circle when Belle died.  No other dog ever took Belle’s place in Willow’s heart.  Willow and Zen have both joined Belle now – hopefully romping through the fields wherever it is that fabulous dogs and cats go when they die.  They have much good company there.

I was told a story years ago about two small dogs that lived in Manchester Village.  The owner was out walking them, and somehow (not on a leash?), one of the dogs was hit by a car and instantly killed.  When the other dog and the owner ran over to the dead dog in the street, the second dog suddenly screamed in pain and dropped dead, supposedly from a heart attack caused by the shock.  The person who told me this story insisted it was true. 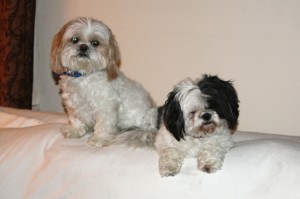 Lilly and Gizmo were my first guests when Halfling B&B officially opened for business in the fall of 2009.  Since then, they have stayed with me regularly, sometimes for extended periods of time.  From that first visit, they easily worked their way into my heart.  They are two peas in a pod and are clearly very much in love with each other. They are treasured members of my extended dog family and also happen to be my favorite little comedians.  They absolutely KNOW that they are funny.  They have little routines they perform and Lilly especially will then look over to see if I “get” the joke. She often has a mischievous glint in her eye.  There is nothing quite as endearing as a dog with a good sense of humor.

Lilly died last Sunday from kidney failure, probably due to Lyme disease.  She was about 4½ years old.  I know that she is in very good company – maybe Zen has even allowed her to sit very close. To Lilly’s human family and to Gizmo we send love and hugs and our condolences for such a heartbreaking loss. And to Lilly: We love you. We will miss you — more than you can know. 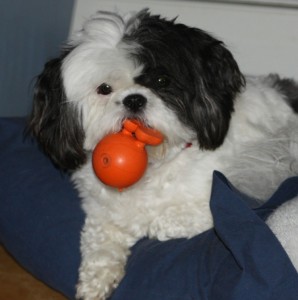 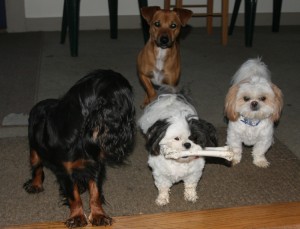 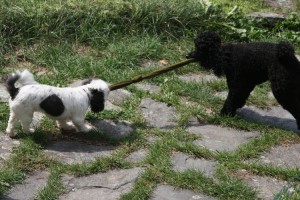 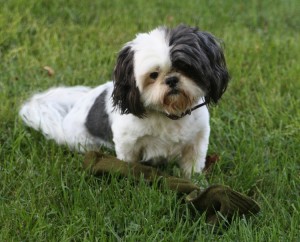