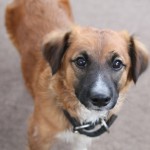 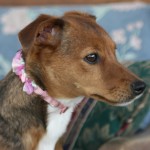 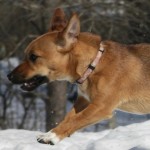 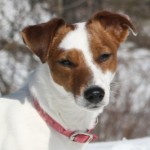 Four Jack Russell terriers arrived this week, along their very own “Terrorist Handbook.”  In addition to some general information about feeding and schedules, their handbook described the basic personalities of the different dogs — who is bossy, who is a mush, who will pout, who has opinions and isn’t shy about declaring them, who might rumble if provoked, and who will be just as happy in a snow bank as on the couch. This kind of information is quite helpful. Most importantly, I can consider myself forewarned, and therefore forearmed, when they are mingling with the other dogs. 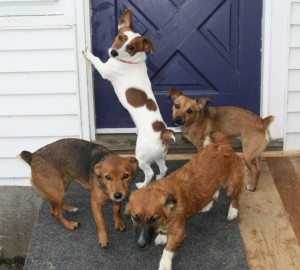 Outside in the yard it’s non-stop action. Waiting (a ridiculously inaccurate description) by the door to go in or out, these pint-sized pistons of solid muscle leap and jump, easily as high as my waist.  It’s like they are on pogo sticks.  Once out the door they are off in a flash – running, playing, exploring, searching for – and possibly even willing to dispatch, if the need arose – all manner of real or imagined invaders.  They are noisy.  And – oh – they are fun!

Inside the house, they are just as likely as the Cavaliers to transform themselves into couch potatoes and/or lap dogs, or to find the perfect patch of sunlight to nap in.  Joe is the only “hairy” 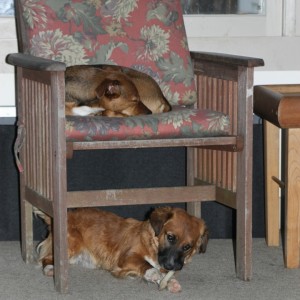 one, and he smiles (and looks, according to his owner, like a monkey) showing all his teeth.  I’m sorry I wasn’t quick enough to get a picture of that cute smile.  Shortly after their arrival, Kona, the older male, attempted to stake out the dog room as his own.  But I told him that room is MINE, and I make all the rules here.  He was quite the gentleman after I thwarted that plan, and opted for my lap instead of continuing to guard the counter where the food is stored.  Mind you, I did dredge up my old boss bitch routine in order to impress him.  My boss bitch is a little rusty because it hasn’t been used much in recent years.  But that’s a story for (and of) another time. 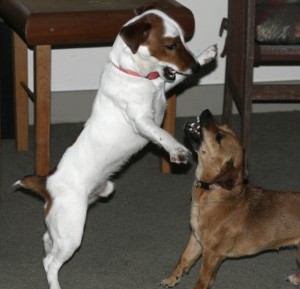 There is nothing soft about these tough little terrier bodies, except for the melty, love-filled expression in their eyes when they’re snuggled on your lap.  Did I mention they ALL wanted to be on my lap at the same time – including the Cavaliers?  There was some requisite pushing and shoving.  Bika claimed front and center.  The only spot Sumatra could find was on my shoulders, draped around my neck.  And all of them had to work around certain Cavalier expectations of entitlement.  It was silly of me to even consider reading a book.  There’s simply no room for a book in this scenario.  Actually, there’s barely room for me in this scenario.

Luna was in heaven with the little terrorists.  She was born with a sign around her neck – it’s the one that says: “Please boss me around.”  So for a 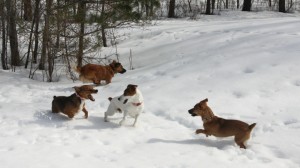 couple days she had four bossy terriers delighted to tell her what to do and how to do it.  She thought it was fabulous fun because she does like the attention, even that kind of attention.  She followed them around, happily surrendering toys when asked (told) and begging for any suggestions (orders) they might have.  She is very sweet and wants to be friends.  And she’s willing to do whatever it takes. The older spaniels preferred to watch from their vantage point on the couch.  You could see by the look in their eyes that they couldn’t imagine why on earth Luna thought it was fun to be at the bottom of the pecking order.  Ah – such selective memory.  Luna is on the bottom of THEIR pecking order too.  Did they forget that’s probably why she wears the sign in the first place?

The Jumping Jacks have gone home.  It was a gas.  Everyone took a long nap after they left.